A version of this article first appeared in Medical Tourism Magazine

Chinese citizens are leaving their homes in search of the best care available, or for the care that they desperately need. Some 483,000 people travelled outbound from China for medical tourism in 2015. These medical travellers spent USD6.3 billion on treatment in 2015, and a further USD3.4 billion on travel and accommodation, making outbound Chinese medical tourism a USD9.7 billion business.

Chinese citizens are leaving their homes in search of the best care available, or for the care that they desperately need. Global Growth Markets research found that some 483,000 people travelled outbound from China for medical tourism in 2015.

This number has been growing rapidly over the past few years, with volumes of travellers estimated to be increasing at 31% annually since 2012. And this double-digit growth is set to continue, with the number of outbound medical tourists from China expected to surpass 800,000 in 2020.

These medical travellers spent USD6.3 billion on treatment in 2015, and a further USD3.4 billion on related travel and accommodation, making outbound Chinese medical tourism a USD9.7 billion business. This market is being driven both by major changes in China’s demographic make-up, and in its people’s ability and willingness to spend.

Who is leaving China for care?

With average hospital costs paid by Chinese medical tourists ranging from USD1,500 for dental procedures, right up to USD146,000 for oncology treatment, and major destinations ranging from as near as Hong Kong to as far as the US, it is clear that even though it is in the early stages of development, the Chinese outbound market is already multi-faceted.

The new research by Global Growth Markets looks at the market in terms of two key dimensions: treatment type (essential vs. elective) and willingness to spend (want to spend vs. have to spend).

Those who need treatment overseas have serious conditions, such as certain cancers, that cannot be treated in China due to lack of approved drugs, insufficient surgeons with the necessary skills, or lack of technologies.

Those who want treatment overseas may have life-threatening problems such as a serious cardiac condition, or they may just have decided they are tired of wearing reading glasses and want intra-ocular lens implants. They want the best available. Or perhaps they just feel like combining their treatment with a holiday. 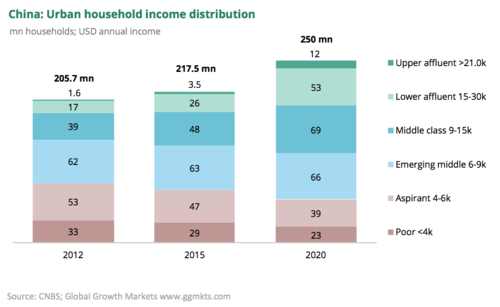 It is estimated that by 2020, out of China’s 250 million urban households, 134 million will be defined as Middle Class or above. Almost half of those numbers will be considered Affluent- this means that there will be over 400 million people potentially able to spend on medical tourism for essential treatments, of which 195 million will be potentially in the market for elective treatment overseas.

At the other end of the spectrum, there are those who don’t have sufficient savings to pay for medical travel, but desperately need treatment that is either not available in China, or considered too risky to undertake there.

Where are they going?

When a Chinese medical tourist is planning their trip overseas, they usually manage everything for themselves from start to finish.

The majority of these tourists select other Asian destinations. Out of the 483,000 patients that left China for care in 2015, less than 2 percent left Asia. The patients that did decide to venture further away mainly went to the US for treatments such as cardiac surgery, cancer programs or surrogacy. 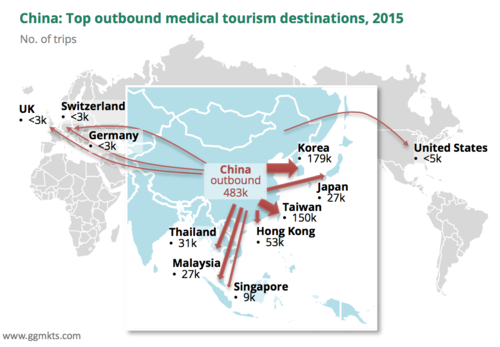 Switzerland is emerging as a destination for super-rich Chinese to try out anti-ageing stem cell therapy. And at USD50,000 to USD100,000 per treatment, it really is only for the super-rich.

At the other end of the price range, simple cosmetic procedures such as blepharoplasty and breast implants, as well as dental treatments, have Chinese patients flocking to nearby Korea, Taiwan and Hong Kong.

Japan saw 27,000 visits – including those choosing the country over Singapore or the US for treatment of more serious conditions – taking the East Asian total to 409,000, or 85% of all outbound medical tourism from China.

Most of the remaining 15% headed to Southeast Asia, especially Malaysia and Thailand, which attracted 58,000 between them for wellness, health checks, and important but less life-threatening treatment.

Singapore, favored for its super-high quality of treatment, rigorous efficiency, and the fact that many of its doctors and hospital staff speak Mandarin, played host to about 9,000 Chinese patients in 2015.

An estimated 5,000 patients visited the US, and a similar number went to Europe, mainly to Switzerland, the UK and Germany. Most of these were affluent patients who chose to travel so far because they could easily afford it, and wanted what they considered the best possible treatment.

As an interesting aside, of the high net worth individuals (HNWIs) who emigrate from China, 10% state the destination country’s medical system as the top reason for relocating, making it one of the top five drivers alongside education, environment, food safety and social welfare (source: Hurun Report). Top ranked countries for the efficiency of their medical system are Singapore, Korea, Australia and Canada.

While any USD10 billion market is worthy of note, that represents less than 1.8% of the total USD551 billion spent globally on medical tourism in 2015 (source: Stanford Research Institute). China is home to 19% of the world population, suggesting theoretical untapped potential more than ten times the size of the current market.

Even if only a fraction of this potential is realized in the next few years there is clearly huge scope for further development. The advent of significant numbers of Chinese medical tourists hitting the market in the past few years already represents an industry-changing trend.

GGM can help with international medical tourism opportunity assessment, strategic planning, market research and partnering - in China, Asia and other growth markets. Contact us to find out more.

We believe the only way to understand a market properly is on the ground. Intelligence from our in-country consultants gives you a competitive advantage in China, Asia, Latin America, the Middle East, Africa and other opportunity areas.

Our clients benefit from accurate data, reliable insights and strategic advice, giving them the confidence to make better business decisions and succeed in their global growth markets.

Enter your work email to receive our free GROW newsletter on international market intelligence and strategy.

 Successful track record in your sector since 1992

 Pragmatic advice based on accurate data and reliable insights

Find out more about our international market intelligence and strategy services 

Get in touch to discuss your growth markets research and advisory needs: